Here’s an excellent article by Ryan Harbidge, on the Evangelical misuse of the idea of ‘Pascal’s Wager’: 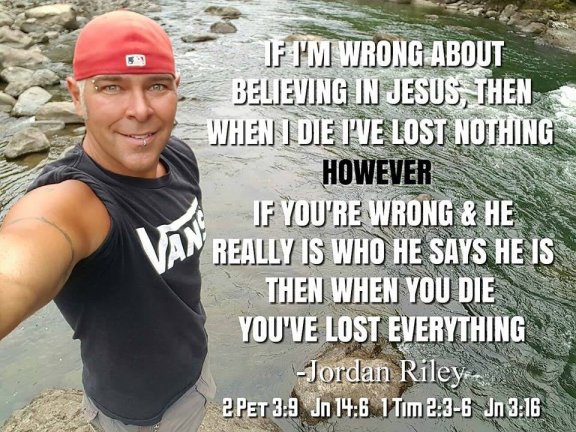 This meme is one of them.

It originates from the thinking of Blaise Pascal and is thus called “Pascals Wager”.  It is one of those which has been making the rounds online lately.  This is a classic manipulative tactic designed to target your deepest existential fears. It’s an attempt to bypass your ability to reason with the intent of herding you into the corals of fear based religion.  I would like to point out some problems with the thinking it represents:

There is an assumption going on in the background that the only reason we are brought into material existence is to see if we can pass a divine final exam. To hopefully come to find and believe in the only correct information about God. The purpose of acquiring this information is not for the good of this life either. It is only so you can escape this earth someday and more importantly….escape the default destiny of being tortured forever in hell for the crime of not finding the right information in time.  The end goal is to end up in some blissful place called “heaven” for eternity.   Based on this thought process which is the foundation of evangelical Christianity, there are two logical ways of thinking about this meme.

1.  There are thousands of religions around the world.  Apparently there is only one belief system which will exempt you from eternal torture. Christians claim that theirs is the only one.  However, most other religions make the same claim.  I’m not much of a gambler. In fact, I once had to walk through the casino on a cruise ship to get to another part of the boat.  I saw the slot machines and was about to put a quarter into one, when I realized I would likely never see that quarter again.  I put it back in my pocket and kept on walking.  The stakes are much higher and the odds are not in your favour in this supposed eternal gamble.  Wouldn’t it be smarter to embrace and practice all religions?  I would be much safer becoming a Jewish, Muslim, Hindu, Buddhist Christian just as a start!  Exhausting, yes.  But hey…who wants to be tortured forever?  Might be worth it to diversify.

2.  Most Christians believe that hell is a place where the presence of God is absent. They also believe that somehow, while loved ones who died without believing correctly are being tortured endlessly, they will be enjoying heavens bliss.  I won’t presume to know your capacity for relationship with dodgy people, but for me, I would have a real hard time trusting someone who claims to be good and merciful, then finding out that he tortures people in his basement.  I just couldn’t bring myself to have a close, vulnerable relationship with that person.  Why?  Anyone who tortures someone else—for any reason is a monster and cannot be trusted!  If the religious people are right and God is truly like that, then God is indeed a monster. If heaven is a place where that god is, heaven is really hell.  “Hell” is an excellent name to call a place where you are trapped for eternity with someone you can’t trust. Someone you cannot ever feel safe around.  Knowing that people you love—people this god claimed to love while they were in physical form are being mercilessly tortured with no chance of reprieve. Also, if hell is a place where that god is absent, it must be heaven.  It becomes a place of bliss.

What if Jesus was right?  What if there isn’t and never has been some quid pro quo intellectually or morally for enjoying a nice afterlife?  What if Jesus was simply introducing to us a way of living (the way of Christ) which shows us how to be fully human and live fully alive on this earth as we were meant to live?  What if the “heaven” we create on earth from living this way simply continues in the afterlife?  What if we have always been unconditionally loved and accepted by a God who is incapable of doing anything else and all we need to do is to participate in the love and acceptance we have always had?

If I’m right, we live in a very safe universe where we truly can be at peace, where we can experience joy, where authentic relationship can flourish as we live in a reality which is saturated with love.

If I’m wrong, we’re all screwed.  No matter what you believe.

As brilliant as Mr. Pascal was, his thought process is rooted in the wrong presuppositions. I choose to believe Jesus and His way of living!