It’s been a good few months now since I last shared any thoughts on my blog, which I explained at around the same time. My good friend Phil Hendry also has a blog, and oddly enough, he too has had somewhat of a hiatus in his blog posts – but today he shared his first post for some time; a piece called ‘Whitewashed Tombs’.

I liked the post so much that I thought I’d share it here, for your enjoyment and upbuilding. I particularly loved the analogy of the ‘ha-ha’, hence me naming my post with that title. So Phil and I are posting our first items in months, but it’s me who’s the pirate 😉

The Church of England has begun a ‘conversation’ around the topic of LGBTQ+ inclusion. The main focus at this stage is on a course, and associated supporting resources, known collectively as ‘Living in Love and Faith’. I did the course myself a few months ago, and found it interesting and thought-provoking. At the moment I am helping to facilitate another course for our deanery (a deanery is a local group of churches). It is proving, again, interesting – perhaps more so than last time, because it’s a much more diverse group.

Something has been ‘bubbling away’ in the back of my mind for a while, but really came to the boil after the most recent session, regarding how members of the church see themselves.

We seem, naturally, to identify with the characters in the gospel stories whom Jesus, rescues, ransoms, heals, restores, forgives. Understandably so, I think, given that many people in churches feel as though they have been rescued, ransomed, healed, restored, forgiven. But something odd, if not to say disturbing, seems to happen then, in a lot of cases – something which I think we’re usually completely blind to.

If we aren’t really careful, we can find ourselves becoming ‘defenders of the faith’ or ‘gatekeepers’ – people who see themselves as preserving the purity of the faith, defending what is ‘right’ against what is ‘wrong’ and making sure that the message doesn’t get ‘watered down’ or compromised. In so doing, we draw ‘lines in the sand’ – we divide people into those who are good and ‘in’ versus those who are ‘out’ and who must change, or show willingness to change, before we will countenance the idea of letting them ‘in’.

Without realising it, we are in danger of becoming just like the people whom Jesus railed against in (for instance) Matthew 23:13:

“Woe to you, teachers of the law and Pharisees, you hypocrites! You shut the door of the kingdom of heaven in people’s faces. You yourselves do not enter, nor will you let those enter who are trying to.”

“Do not judge, or you too will be judged. For in the same way you judge others, you will be judged, and with the measure you use, it will be measured to you.“

Having thought about that, I had a quick read through many of Jesus’ interactions with those excluded by the religious of the day – the sinners, tax collectors, lepers, cripples, blind, etc., – all those seen, at the time, as ‘unclean’ and therefore excluded from temple and synagogue. Jesus doesn’t go in for any of that, at all. He excludes no-one, on any grounds (except, possibly, those who seek to exclude others). He makes himself ‘ritually unclean’ by touching lepers; He heals the sick, forgives sinners, makes the blind see and the lame walk… All things which would ‘pollute’ Him in the eyes of religious. He doesn’t demand repentance (change) before He heals them or forgives them – or even, usually, afterwards – though repentance frequently follows as a sign of gratitude at being accepted and treated as truly human.

It strikes me that, every time the Law of Moses gets in the way of Jesus loving someone, He sets it aside, ignores it, or changes it. With Jesus love trumps (the letter of the) law, every single time. If we are to follow him, and be truly Christlike, we must, surely expect to do the same?

We may believe that ‘the Bible clearly says’ that homosexuality is sinful (there is actually a good deal of scholarly debate about that – clear is one thing it does not appear to be!), and use that as an excuse to exclude those particular ‘sinners’ – but ask yourself – is that truly what Jesus would do? Or would He find a way, instead, to set that aside, so as to allow Him to love them instead of excluding them?

And it isn’t just LGBTQ+ people either. We have also turned against our own, bullying and excluding those who dare to believe different things from us. How is that Christlike? Jesus told us to:

“You have heard that it was said, ‘Love your neighbour and hate your enemy.’ But I tell you, love your enemies and pray for those who persecute you, that you may be children of your Father in heaven.“ (Matthew 5:43-45)

What excuse do we have, therefore to abuse those who disagree with us on matters of faith, let alone those we see as ‘sinners’?

And to those who excuse themselves by saying:

‘I’m concerned for their immortal souls – I’m just saying it to warn them’,

‘I’m saying it in love because I’m concerned for them’,

I would say that you are deceiving yourself. It isn’t your job. You are not a judge, and you’re fooling yourself if you think you won’t be perceived as sitting in judgment. You are told to love them… Which absolutely doesn’t include telling them they’re wrong, even if you ‘know’ they are. Have some humility: ultimately, you might actually prove to be the one who is wrong – even when, as far as you’re concerned, ‘the Bible clearly says’.

We must be so careful in our dealings with those whom we perceive to be ‘outside’ God’s grace – in whatever way that is, be it because of their gender, sexuality, theology, ethnicity, or whatever. Paul said, in his letter to the Galatians:

There is neither Jew nor Gentile, neither slave nor free, nor is there male and female, for you are all one in Christ Jesus. (Galatians 3:28)

If we believe that, we must treat everyone the same – in the way we ourselves would like to be treated.

We went and stayed at Lee Abbey in Devon during the summer; and I found that it has what I think was once a ‘Ha-ha’.

Rather than being, as you might imagine, a somewhat cynical, entirely feeble, attempt at humour, a ha-ha is a wall. It’s a rather special sort of wall. From one side (which we’ll call the ‘inside’ for now), it and the field beyond look just like one open field. It appears as if the animals grazing in the field are free to wander wherever they like, even right up to those on the inside of the ha-ha.

However, all is not as it seems. From the ‘outside’, if you do try to wander towards the ‘inside’, you encounter a ditch, and inside the ditch is one face of a wall (entirely invisible from the ‘inside’), preventing those ‘outside’ from coming ‘inside’… (And preventing them pooing on the areas where people walk.) 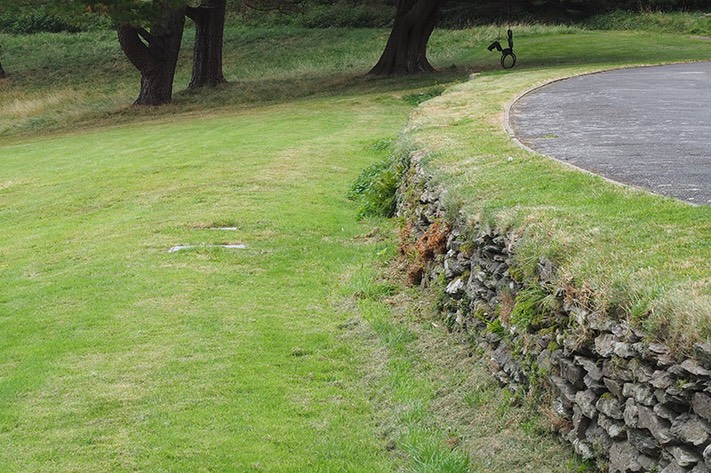 I expect you can see now where I’m going with this.

From the inside, church appears to be or, rather, wishes to present the appearance of being, ‘open’ and accessible to anyone. But…

If you are on the outside, or if you leave and try to come back in – then you’re likely to meet a ‘Ha-ha’ – a fence which those on the inside insist is nonexistent, but which seems all too real, and insurmountable, to you on the outside.

It is very easy for us, quite unknowingly and unintentionally, to erect barriers to people we perceive as being ‘outside’. Someone I know is fond of saying that God loves all of us just as we are, but that he loves us too much not to want to change us. It’s sincere and very well-meant. But to someone hearing that, it can be hugely threatening. I have had people say similar things around me and to me. I’m not bothered by it now, because I know now how gentle and loving God is (far more so than almost any Christian I know!) . But, ‘back in the day’, words like those made it feel as though God wanted to ‘take over’ and change ‘me’ into someone else – it felt as though I was going to lose ‘myself’, my identity, and be subsumed into some nebulous, alien, ‘otherness’, and that I’d no longer be me, and no longer know myself – that I might even become one of those terribly sincere, self-assured, Christians who actually made me feel profoundly, inexplicably, uncomfortable. That actually held me back, for decades, from truly ‘opening myself up’ to God and God’s people.

These sort of ‘barriers’ are essentially invisible to those ‘inside’ – ‘we welcome anyone and everyone’ we say. But to those outside, it doesn’t look like that. There is a feeling that if you don’t/won’t/can’t ‘conform’ with what are seen as the ‘expectations’, you won’t be welcomed – or that, if you do come, sooner or later, you’ll have to either conform in order to become ‘someone different’, or find yourself ‘outside’ – whether it be for reasons of gender identity, sexuality, doctrine, theology, colour, etc.

So have a care that you aren’t, inadvertently, whilst believing that you are simply doing what’s right, acting as one of those whom Jesus referred to as ‘whitewashed tombs’.

Header picture shows the ha-ha at Longleat, near Warminster, Wiltshire. This shows the view from ‘inside’ the ha-ha. The ha-ha itself is the grassy line across the picture just below half-way down, although it isn’t this obvious for its entire length.

Here is the link to Phil’s original article