Bullying in the Church. You’d have thought, wouldn’t you, that a place meant to be known for healing, love and acceptance is also known for intolerance, bigotry and bullying. Sadly, extreme churches showing this kind of behaviour are generally the only ones who make the news – for example, the infamous ‘Westboro Baptist Church’; those who just quietly do the work of Jesus are never mentioned. Well, we can’t have Good News on the news media, now can we? 😉

Therefore, I must say first up that bullying does not go on in every church. My church, for example, is known for its acceptance of people from every walk of life from lawyers right up to the homeless 😉 And especially the homeless. We see every homeless person coming through those doors as Jesus wanting a hand. When I was naked, you clothed Me, and all that (Mt 25:36). And there are many, many churches out there which are similar; they simply show the love of Christ without partiality to all who would come.

But unfortunately some churches are still known for their insularity, exclusivism, dogmatism, and their intolerance for anyone who even slightly ‘strays’ from the ‘path’. Awkward questions are discouraged. Invariably, the leadership’s authority is unquestioned. Everything is tight as a drum with no wiggle-room, and the Bible is to be believed absolutely as inerrant, inspired and infallible, and ineligible for discussion. The belief systems are laid down in stone and woe betide anyone who tries to change that. The idea of believers being ‘…transformed from one degree of glory to another…’ (2Cor3:18) is fine as long as that transformation occurs in accordance with the approval of the group. Instead of a real, fluid, living Relationship with Jesus Christ, members are confined entirely to the straitjacket of rigid belief held by the leadership. I could go on, but that’s enough negative for now.

What does all this have to do with bullying? Well, these types of churches predictably use bullying tactics to keep their members – whom, don’t forget, Jesus died to set free – in line. And I recently read an article on Paul Ellis’s ‘Escape to Reality’ blog which, along with its discussions, has become for me the ‘go-to’ article about church bullying. It describes what church bullying looks like, and how it is used to control those in the group. So, if there’s any potentially dodgy behaviour going on in your church, simply look at this list – it is not fully comprehensive, but helpful commentors have added other items (which you can see if you go to the original article by clicking the link at the end of this piece) – and see what you think. Some of this stuff I didn’t even realise was bullying, but when you look at it, it really is. One day, I might compile this list myself with all the additions. But, for now, here’s Paul’s article. It’s quite the eye-opener! 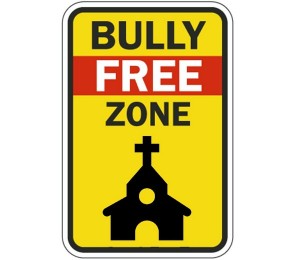 As a parent of four, I regularly encounter bullying. No, my kids aren’t getting abused at school. But we often receive messages from educators informing us of the symptoms and types of bullying. Honestly, it must be hard to be a bully these days, either at school or in the workplace, with everyone so well informed.

But what about bullying at church? Hardly anyone talks about this – unless it’s sexual abuse, in which case it’ll make the front page. But there are other types of bullying. I’ve heard hundreds of stories from readers and church leaders. You wouldn’t believe the damage done to people in the name of God.

Jesus is not a bully and his church ought to be a safe place. But religion turns people into bullies. (By religion I am referring to that pseudo-spiritual system of self-improvement that Jesus condemned.)

Bullying is using power to control, harm, or intimidate others, which sounds a lot like what religion does all the time. In essence, religion is a system to control and coerce people through intimidation and manipulation. Which makes religion pretty stinkin’ evil.

So why aren’t we talking about this? If we are to stand up for the weak (Ps 82:3-4), doesn’t that mean standing up to bullies wherever they are found?

My desire is not to name and shame anyone (and I won’t publish comments that do), but to start a conversation about bullying behavior. I suspect a lot of church bullying is unintentional. With the best of intentions I have bullied people from the pulpit. This was wrong. Forgive me. My only excuse is I didn’t know I was doing it, which is why we’re here.

My purpose is not to hurt anyone but to identify hurtful behaviors so that all may be free and Jesus may be glorified. If you have come looking for stones to throw, you are in the wrong place. But if you want to be forewarned about the types of bullying in the church, read on. Here is an incomplete list of 30+ ways we use power to harm others in the church. Let me know what I missed.

Bullying behaviors in the church

A: Bullying from the pulpit

B: Bullying from the flock

C: Bullying in the fellowship

A church that is subject to bullying will be depressed, weak, and unfruitful. If you are part of such a church, your choices are either confrontation or departure. But before you do anything, pray. Pray for grace. If you’ve been bullied, look to Jesus your Healer, and be better, not bitter.

And pray for wisdom. I know some will criticize me for not standing up sufficiently for victim’s rights, but often bullies are victims themselves. They need healing too. So pray for those who’ve hurt you (Matt 5:44).

And don’t forget to check the log in your own eye, for we are all broken people. We all need grace. The tragedy is that religion brings out the worst in us. Religion makes us ugly.

But the good news is that Jesus loves us at our worst and his love changes us. Just look at what he did to that bully of bullies Saul. He turned him into the Apostle of Grace!

Jesus loves all of us – bullies and their victims. By his grace we can all be free.

Click the graphic below to go to the original article: