One of the huge scandals in some of today’s churches is the way in which women are handled. One aspect of this is the way in which the words of St. Paul have been used to stop women obtaining office in the established Church. And, in setting those rules, Church leaders have robbed their congregations of fully half of the real resources of their churches.

This is not a new phenomenon; it has been going on in one form or another for centuries. And it’s not going to change overnight. But things are indeed changing…

In this piece, my friend Tim Chastain of ‘Jesus Without Baggage’ writes a superb piece on how Paul’s writings have been, and still are being, misused.

Those who embrace Christian patriarchy and restrictions on women in church often refer to 1 Corinthians 14 for support:

Women should remain silent in the churches. They are not allowed to speak, but must be in submission, as the law says. If they want to inquire about something, they should ask their own husbands at home; for it is disgraceful for a woman to speak in the church.

Another favorite passage is 1 Timothy 2:

A woman should learn in quietness and full submission. I do not permit a woman to teach or to assume authority over a man; she must be quiet.

Patriarchist usually attribute both passages to Paul, but Paul almost certainly did not write 1 Timothy and the passage in 1 Corinthians might be a scribal gloss. However, our purpose here is not to dismiss the passages but to compare their use to Paul’s actual experience with women in his ministry. 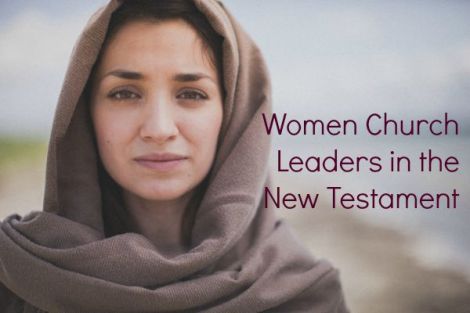 Paul’s letters (and the book of Acts) introduce a number of women who are leaders in the church. Perhaps the best known is Priscilla (Prisca) who is half the leadership team, Priscilla and Aquila. According to Acts 18, Paul first met Priscilla in Corinth; she and her husband had left Rome during the Jewish expulsion. Later Paul, Priscilla, and Aquila sailed for Ephesus.

Paul continued on from Ephesus but Priscilla and Aquila remained. When Apollos came to Ephesus preaching an incomplete version of the good news, Priscilla and Aquila pulled him aside and explained the good news more fully. We next find Priscilla mentioned in the final greetings of 1 Corinthians: ‘Aquila and Priscilla greet you warmly in the Lord, and so does the church that meets at their house.’ This is the only time Paul ever mentions Aquila before Priscilla.

Finally, in Romans (his last letter) Paul says: ‘Greet Priscilla and Aquila, my co-workers in Christ Jesus.’ They had apparently returned to Rome. Paul calls them his co-workers—both of them. It doesn’t sound to me that Paul was concerned about Priscilla’s leadership roles.

The Women Paul Knew in the Roman Church

In his final greetings to the Roman Church (Romans 16), Paul mentions a number of people—including a lot of women besides Priscilla. They include the Apostle Junia who was, according to Paul, ‘outstanding among the apostles, and [was] in Christ before I was’.

[T]o be an apostle is something great. But to be outstanding among the apostles—just think what a wonderful song of praise that is! They were outstanding on the basis of their works and virtuous actions. Indeed, how great the wisdom of this woman must have been that she was even deemed worthy of the title apostle.

There was also Mary, ‘who worked very hard for you’; I doubt she was known for her cooking and teaching of children. And Paul says: ‘Greet Tryphena and Tryphosa, those women who work hard in the Lord…Greet my dear friend Persis, another woman who has worked very hard in the Lord.’ As with Mary, I doubt they were celebrated as great cooks but rather were known for their leadership.

The Church at Rome seemed to be filled with women leaders, and Paul did not object—and he does not mention that they should be silent in the church.

In the same chapter Paul introduces Phoebe the Deacon—who apparently delivered the letter to the Roman church. The term ‘deacon’ technically means ‘servant’ but seems to be much more than that in the church context. The term for Phoebe is the very same term applied to Apollos, Mark, and Timothy.

I commend to you our sister Phoebe, a deacon of the church in Cenchreae. I ask you to receive her in the Lord in a way worthy of his people and to give her any help she may need from you, for she has been the benefactor of many people, including me.

Paul was actually quite progressive in his day regarding leadership of women.

Paul and the Gifts of the Spirit

There is neither Jew nor Gentile, neither slave nor free, nor is there male and female, for you are all one in Christ Jesus.

Paul nowhere suggests that any group of believers (Jew, Gentile, slave, free, male, female) is restricted from any category of ministry. We are all one; no group is superior to any other group, but not every individual serves in the same way. However, Paul does tell us how believers find their place in the church.

Now you are the body of Christ, and each one of you is a part of it. And God has placed in the church first of all apostles, second prophets, third teachers, then miracles, then gifts of healing, of helping, of guidance, and of different kinds of tongues.

No restriction to any gift is based on being Jewish, Gentile, slave, free, male, or female. In fact, remember:

Women in Paul’s circles were active in leadership. I believe those who teach that women cannot be church leaders are gravely mistaken.

Header picture shows the brilliant Dawn French in her role as Vicar ‘Geraldine Granger’ in the classic British sitcom, ‘The Vicar of Dibley’

1 thought on “Paul and Women”