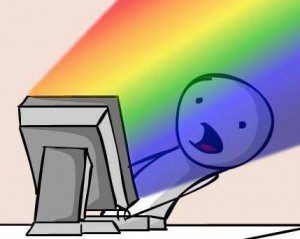 Let’s take a moment to reflect on gay marriage opponents who have lost… absolutely nothing.

Marriage Equality: The law of the land. Marriage is equally accessible for all. It’s the moment we’ve all been waiting for. And by all, I mean those who have waited and waited until they could marry the love of their lives in their own state, where their family and friends are, where their home is; those who months or years ago traveled far from home to marry the love of their lives, and since then have waited for today, when their marriage has finally been recognized as legal in their home state – and their affirming family members, friends, allies and advocates.

The other half of the all is those who are unhappy about this, whose world as they know it has come to an end. You see, for every 9 girls who played hard and prayed hard and won their softball game, there are another 9 girls who played and prayed and lost. I always feel tenderhearted for those who lost, even when my daughter was on the winning team.

And so it is today.

My heart bursts with joy and gratitude for the forward movement this decision represents, as shouts and tears of joy and gratitude explode across this country, I’m hyper-aware of another side that is in tears of grief and loss and confusion.

Both sides poured their hearts out in prayer, and only one side believes their prayers were answered. Let me talk about that side first.

As the ruling came down, I was in a home in North Carolina with a couple of other moms of LGBTQ kids, preparing for our FreedHearts Moms retreat and the 27 moms who will gather together here for a joyful time. This retreat had been planned for months — the SCOTUS ruling was an added bonus.

Here’s what happened after the ruling.

We exchanged exuberant texts with our kids. We talked to people for whom this is personal, whose lives are changed because of this. My friend Darla texted me. She had traveled from her home state of Louisiana to Massachusetts so she could marry her wife last year. She wrote this:

Can you simply imagine? Never before had a feeling of inclusion? And yes, some people alive today remember the exclusive lunch counter and exclusive bus.On the other hand, the side that “lost” wonders what went wrong. They are angry and confused. It doesn’t make sense to them. People they don’t even know, will never know, are now able to marry. And somehow, because of what they have been taught, this is a huge loss for them.

It is forcing them to rethink what they know to be true. Some will courageously look at the root of their beliefs. They will see that they prayed unceasingly for the best decision, for God’s will to be done, and this is the outcome. Now what do they do?

Could it be that this is God’s will? Could it be, maybe, the fight they have put up against Marriage Equality is not God’s fight?? Only the most courageous will go there.

Here’s the thing to know: you can still sit at the counter, you can still ride in the front of the bus, you can still feel inclusion as you always have. You have lost nothing…except your own perception of how the world should be. Perhaps that pull you feel is God is pulling your perception out of your hands.

After all, both sides prayed.

You have lost nothing, but those you have fought against have gained the world.

Your whole family can still sit at the soda shop and have ice cream. It’s just that now another family, whom you don’t like, who was formerly excluded, can now also come have ice cream.

For you to scream, “No, NO!” while you slurp your own ice cream is just mean. I hope you will stop.

Link to original article is here.